What Fans & Groupies Mean to Your Organization 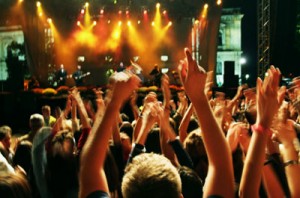 A few weeks ago I saw one of my favorite bands, Guster, in concert.  Guster is an alternative rock band (known for using bongos instead of drums) – I’ve seen them live three times now and own all of their cd’s.  Needless to say, I’m a fan.  But I’m not just a fan who likes to listen to their music; I’m kind of a groupie.  I’ve followed the band from the beginning and I’ve enjoyed, respected and defended every piece of music they’ve created.  They’ve evolved as artists and have gotten quite a bit of flack from ex-fans because of it, but I respect their growth and everything they’ve done has really resonated with me.

People aren’t just fans of singers and bands, though.  They’re fans of stores, facebook pages, brands, designers, companies, products, political leaders – you name it, someone has probably said, “I’m a fan of that.”  In fact, the term is used so loosely these days that it may become obsolete.  But as fandom dwindles in importance, groupies become more revered.  It’s not enough to just be a fan.  In the music world, a fan is someone who illegally downloads songs, goes to an occasional concert, and knows, from the entire discography, only a handful of songs.  These are people not truly dedicated – they have outside interests and loyalties and can sometimes jump ship if they no longer agree with the object of their fandom.

Fans are great employees.  They meet and exceed expectations on a regular basis and are excited to be a part of the company.  Groupies are better.   As in the music-world, they go above and beyond every single day to live their passion for the company and it’s mission.  Groupies will work late and on the weekends without being asked, will enthusiastically contribute to all discussions and won’t fudge their expense reports.  Most importantly, a groupie BELIEVES and is dedicated to the overall growth and intent of the company – they drink the kool-aid (see #2).  Fans, on the other hand, will tote the “company line” and may go through periods of disenfranchisement.  This isn’t necessarily a bad thing and I think for many people there are times when they’re a groupie and other times when they’re a fan.  It’s an ebb and flow, cyclical process. But from the company’s perspective, it’s about catching their employees at varying points of the cyclical process.

Companies should cultivate their groupies into positions of leadership, encouraging them to infect colleagues with their energy and enthusiasm.  Companies should also have open channels of communication with their fans, discerning what is stopping them from being a froth-at-the-mouth, wake up at 4 am to do work every day, talk about it at a cocktail party, groupie.  For that matter, they should also have these discussions with groupies, “why are you so crazy about our company?”  These conversations can enlighten all parties into how employees can be more efficient and motivated in their day-to-day jobs and how management can build a more energetic corporate culture, more compelling products and services, and a stronger long-term growth strategy.