CEO Hurd Dismissed – anyone else?

The news this week was quite shocking about Mark Hurd’s dismissal at HP. 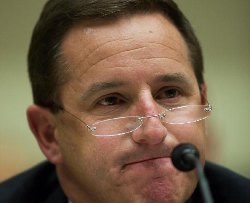 There are many complicated factors circulating and polarized perspectives.  Hurd’s success at HP is now under debate ranging from great operating performance in complex times to being keenly disliked at the company.  Even the reasons for the dismissal are somewhat cloudy – ranging in extremes from a sexual harassment cause to expense reporting issues.  The latter issue, though a small amount, could not be tolerated unless the organization intended to just “wink” at any minor false reporting making it justifiable throughout the organization.

Regardless of Hurd’s guilt or innocence, the issue of intra-company relationships can have major legal and organizational implications.  Morality can’t be legislated, but the implications of an inter-office relationship can be enormous.

I recall a situation where a senior executive was being replaced in a high profile position.  Both attended a dinner discussing transition which included a confidential and honest sharing of the working style, good and bad, of the new person’s new boss.  A few months later, the leaving person learned that his replacement and her boss were having an affair.  Though this situation never resulted in a suit or public accusations, it caused embarrassment and suspicion on the part of the executive who left the position and who began to question the motivation for the change.

Organizational dynamics and biases cannot help but being impacted by an office affair.  The organization’s entire team will be effected as rumors circulate, mostly questioning trust, the foundation of any organization’s success.  Without confidence that an organization will be run without obvious biases in an affair, a team begins to lose effectiveness and that affects shareholders and performance.