HRI’s CEO, Shaun Emerson, recently published his first post as a guest blogger over on Women of HR.  His post revolves around W.C. Fields’ famous words, “it aint what they call you, it’s what you answer to.” Professional women, whether it is conscious or not, often “answer” to stereotypes and standards that, despite the great accomplishments in our history, still exist.  It’s important to acknowledge and appreciate what our female predecessors have overcome throughout their careers.  In doing this we pave the way for our own and future generations’ success. 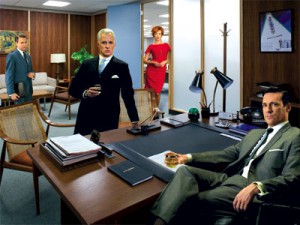 With Mad Men returning to the airwaves for another season, I’ve been thinking a lot about the role of women in yesterday’s and today’s working world.  Mad Men is the quintessential example, and primary exposure we have today, to yesterday’s working world.  We casually gloss over the exclusion of women from positions of power and instead focus on the glamorous and fashionable lifestyle of the era.  Jackie-O sunglasses, 2-martini-lunches, and high-waisted pencil skirts may be sexy but sexual harassment at work definitely isn’t.  Just ask HR.

It might not be that Mad Men fans actively perpetuate, or believe in, gender based stereotypes but it seems that the show and commentary brings into glaring relief the work we still have left to do.  We may not be subjected to sexist jokes in the office, but what attitudes still linger?  As Shaun points out, women may feel compelled to clean up the conference room after meetings while their male colleagues do not.

Over at Venture Beat, Steve Blank provides eleven pieces of advice, gleaned from his own career, he’s given his daughters as they enter college and the professional work force.  His points, in summary are that for most companies, the “rules” are set by men and as women it’s our responsibility to learn these rules to be successful and climb the corporate ladder.  He further articulates:

Some find the idea of gender differences uncomfortable. Having fought to have men and women be treated equally, discovering that there may be gender specific hard-wiring for behavior sets up cognitive dissonance. Some simply won’t accept that there are workplace gender differences.

Essentially, gender differences exist in the workplace.  And this may not be all that bad.  It is, according to Blank, a reality that needs to be accounted for as we operate in our professional lives.  I tend to agree.  Sure, the Mad Men made the rules in the 1950’s, restricting many women from rising past the rank of receptionist, and their sons, according to Blank, may still be making the rules today.  It’s not so important who makes the rules but how we, as women, respond and adapt to these rules.  In any professional situation, for both men and women, there is a “game” that needs to be played.  If we disagree with the rules of the game, then we need to change them or find a new game.

I don’t really consider myself a feminist.  I do, however, think too few women realize and respect how far we have come in so little time.  To put it in perspective, women won the right to vote less than a century ago and it was only 50 years ago that shows like Mad Men (and Leave it to Beaver) were a reality.  Today we don’t just vote, we hold political office; and we don’t just make coffee in the office, we own and run successful companies.  Acknowledging the great strides we have made in living history is the first step to overcoming the obstacles we still face.

Think about your own office and what “game” is being played and what reality exists.  Do Mad Men run your office?  Are your female employees aware of the rules of the game and afforded equal opportunities?  Even more broadly, are you looking at all of your team members equally?  Thinking about your team outside of gender (and age, and racial, and any other) stereotypes is the first step to overcoming any professional barriers that are left to break through.

Maybe I am a feminist after all?