Book Review: Millennials in the Workplace

I just finished reading, “Millennials in the Workplace” 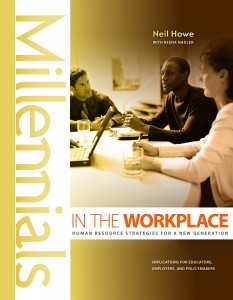 the new book from Neil Howe. Mr. Howe started writing about Millennials in Generations published in 1991 and this is his sixth book on the topic. When I was asked to review the book, I was excited about the opportunity given my particular interest in the subject. I wasn’t disappointed.  While Mr. Howe does a great job providing a detailed, heavily researched and multi-surveyed explanation of who the Millennials are and why, he also provides suggestions and ideas for educators, private employers and public sector employers on how to best engage these young people. An excellent guidebook.

Millennials, as defined by Howe, were born between 1982-2004. As of 2010, America has 96 million young people that would be considered a member of this generation. Comparatively,  Generation X (1961-1981) represents approximately 46 million Americans while the Boomers (1943-1960) number 76 million. Critical to understanding the implications of Millennials in the world of work, Howe writes at length comparing and contrasting these generations throughout the book. He makes a compelling case that the Millennials are like no other generation before them.

Given my confusion over all the negative press regarding the Millennials’ work performance, this rational and researched argument for the benefits of this generation is needed. I continuously caught myself nodding in agreement at Howe’s explanation of their characteristics and his anecdotes highlighting his points. Howe defines seven core Millennial traits: special, sheltered, confident, team oriented, conventional, pressured and achieving. He dedicates a chapter explaining each of these traits and provides “how to” guidance to employers, educators and policy makers on how to best nurture these characteristics. They are our present and our future. It is critical to your business to figure them out!

Personally, my experiences with members of this generation have been very positive. Like Howe, I also found them to be smart and confident.  As a consequence, they will be opinionated and comfortable dealing with adults (Howe ties this trait to the close relationship Millennials have with their parents). A recent story I was told by a colleague highlights these traits in action. A Fortune 50 company had hired 40 interns for the summer. Four of the interns separately emailed the CEO requesting an audience. The CEO was surprised by the boldness but, in a smart move, set up a lunch with all 40. Unfortunately, some of us older folks may find these actions as bordering on inappropriate and possibly even disrespectful. Don’t. Like this CEO, engage them. Let them be heard. And read this book. It could be good for your business.